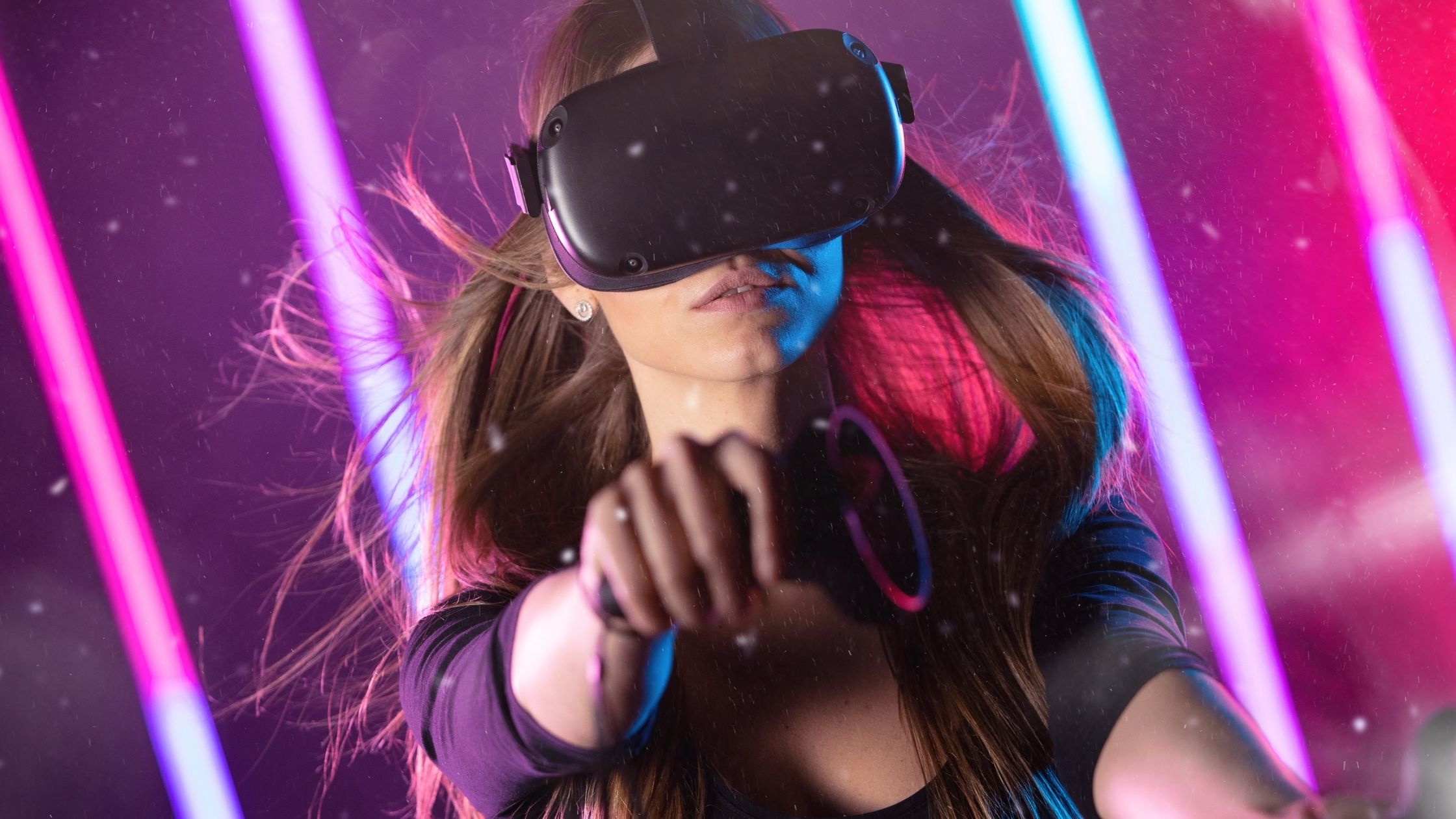 According to a Digi-Capital report, the virtual and augmented reality market will grow from $13 billion (2021) to $67 billion by 2024. At the same time, it is expected that VR/AR devices will oust the popularity of smartphones, the current device number.

That is why Facebook began to acquire virtual and augmented reality companies, such as Oculus VR, Pebbles Interfaces, The Eye Tribe, Ready At Dawn, and Downpour Interactive and BigBox VR. Later in this article, the majority of VR and AR devices we will describe belong to Facebook!

For a moment, VR and AR sets are the most popular and available for mass consumption products of such kind. Those are some of the most prominent companies that are producing VR and AR devices.

As we mentioned above, Oculus is a company producing VR glasses that Facebook took under its wing. The Oculus set includes VR glasses and 2 remote controls for both hands. One of the main benefits of the glasses is their lighter weight in comparison to other models. The latest model, Oculus Quest 2, can also be used without controllers and the headset supports hand tracking.

Oculus can connect with PC and smartphones. The VR glasses come together with the platform, where users can browse and manage VR apps.

Oculus remains one of the most affordable options with a reasonable price on the market.

Rokid Air - portable and lightweight glasses of augmented reality. Unlike VR glasses Rokid Air are smaller and can fit in a small bag or even in a pocket. Rokid Air is the first truly progressive smart glasses for consumers with the removal of content in amazing quality and comfortable ergonomics.

Users can run apps from a smartphone, play video games with a PC or console, and watch movies. Switching multimedia and other manipulations can be done using a voice assistant and gesture management.

Mixed reality glasses Microsoft HoloLens 2 are the next generation of gadgets for working with VR/AR content. The device received an increased viewing angle, a new processor, a unique system for tracking the position of the eyes and hands, as well as voice control. New HoloLens 2 glasses provide more complete immersion and are also more intuitive and convenient to use. The device allows you to interact with holograms and VR objects using your hands at an intuitive level, without special gestures.

It’s important to mention that for now those glasses are extremely expensive ($3,349 - $4,349 for a pair) and designed for use by employees whose hands are busy performing physical labor. They help them identify the problem in the operation of the aircraft or see step-by-step instructions.

Other technology for immersion

The era of Web 3.0 brought us an opportunity to develop new innovative technologies. The development of VR and AR was only a first step. However, they are already not enough for the immersion the users would expect. Hence, there are additional technologies that will help to enter the metaverse.

Sensor gloves are supposed to give sensations such as pain, heat, numbness, cold, and others. This glove would be essential to enter the metaverse. That’s why there is no surprise that Meta is investing in the development of sensor gloves. The company is developing handwear that reproduces sensations such as grasping an object or running a hand along a surface.

Apart from Meta, there are other developers designing sensor gloves. In the recent paper by Jasmine Lu, Ziwei Liu, Jas Brooks, and Pedro Lopes, the group of scientists describe the concept of sensor gloves that implement chemicals triggering user sensors (also known as chemical haptics). Those chemicals are safe and contain small doses of key active ingredients. Those are tingling (sanshool), numbing (lidocaine), stinging (cinnamaldehyde), warming (capsaicin), and cooling (menthol).

Let’s see what other wearables we will see on the market with such technologies 😉.

Another important player in the virtual reality market, Vive releases a face tracker - a small and inexpensive ($130) gadget that attaches to VR glasses and reads emotions from the lower part of the face, which are the lips, chin, and even tongue.

There is a problem with avatars in virtual reality - lifeless faces. Thank the face tracker, this problem will remain in the past.

Traditional control systems, whether for work or entertainment, have always been required to use the output of your physical actions, like pressing the buttons or using the remote control. Imagine that instead of an additional tool to operate a computer, one can operate it with thoughts!

Facebook is the one that wants to implement this function in its metaverse. That is why the company acquired CTRL Labs. CTRL Labs is developing a wristband-like device that will allow controlling digital interfaces by using the electrical signals that run through the user’s arm. That is how it allows the brain to control the movement of the hands and fingers.

Miointerface will solve one of the fundamental problems of virtual and augmented reality devices: it will finally become convenient to type on virtual keyboards because humanity has not yet invented any faster way to enter text. Modern controllers are good for any actions - shooting, drawing, modeling - but not for text input and working with very small details. If such a prototype becomes a mass-produced device in the next year or two, working from home in a virtual “office” from the exotic will become commonplace - after all, it is much more pleasant to work not with the small screen of your laptop, but with a virtual surface the whole wall.

Another company Valve is developing the dream of advanced humanity - a gadget that helps users control other devices by the mind. Valve’s partner on this project is the company Tobii, a world’s leader in eye-tracking technology.

Of course, this selection does not end with the amazing news: Apple’s AR/VR devices have been rumored for years, and they threaten to hit the market in the next few years; Samsung is also developing augmented reality glasses; the list of incredible new things can be added to literally every week. And this is how we are witnessing the change of must-have devices, where VR glasses will exchange the smartphones.