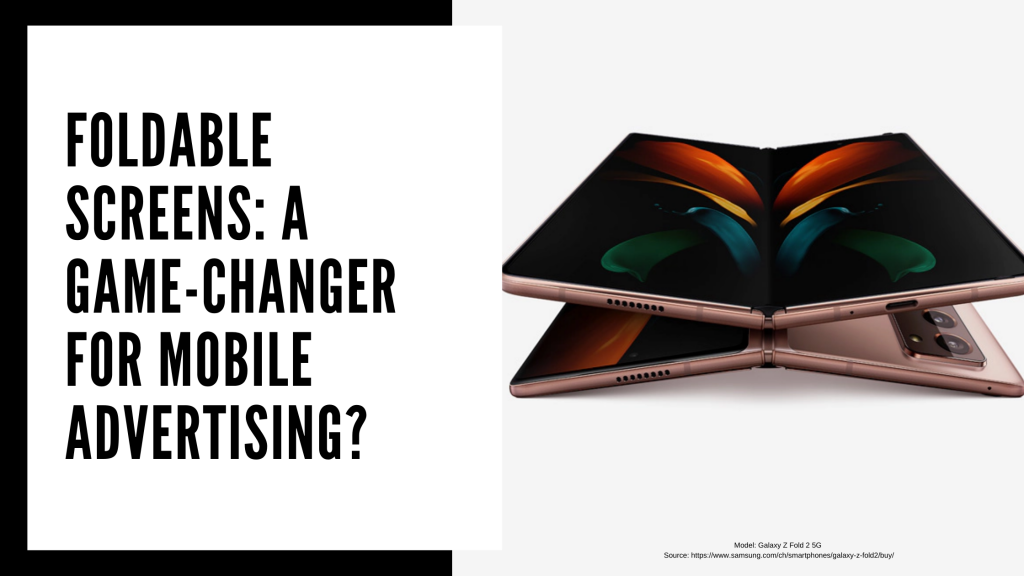 Do you remember when the idea of being able to fold a screen was so futuristic? Well, now mobile phones with flexible OLED displays are here, ready to be bought and folded like a piece of paper. Some brands like Motorola or Samsung already brought their foldables to the market, but soon we will see other companies launching this new technology. Initially, these devices were sold at a very high price, in some cases exceeding 2000$. Today we see some prices slowing down to ca. $1400. Most probably, more affordable options will be on the market soon.

“Foldables were born out of a desire to completely reimagine the smartphone, changing the way people watch, work, play, socialize, capture and more on the go.”

“The new generation can see how each can flex to elevate their mobile experience in a powerful, freeing, and expressive way.”

So what does it mean for mobile advertising? Very simple: New engagement touchpoints, new format possibilities, and new challenges. Here the question is no longer about how big the display is, but what kind of form it can take and how it can be folded, e.g., horizontally or vertically? In, or out? Foldable phones came out in different shapes and sizes. You can have, e.g., a screen like a standard smartphone that you can fold to make it smaller and, finally, fit into your pocket again, or a bigger one, which reveals a larger screen once unfolded. Some of them also have an additional non-foldable screen on the outside.

Think about a website developed just for a desktop view. When you look at it on your mobile phone, some content is usually distorted, making the site difficult to navigate. The same applies to foldable phones. It is important to design the ad creative in a way that it does not get stuck, e.g., in the fold, or risk being displayed on the side which is not currently used. Standard images or videos are not made to be folded, so we need to be aware of this format to avoid distortions. Will the ad be automatically pushed fully to one side when the device has been folded? As a response, marketers should stay flexible and create a design that adapts to different shapes and screens.

Of course, these devices offer not only challenges but also many opportunities. Seb Lepez, founder and CEO of Jolt Digital, highlights:

“Where we might see some more disruption will be around advertising formats. Brands and agencies will come with new and fun creatives to leverage the foldable phone. However, like everything in digital, brands should test and learn if [the new formats are] delivering well for them before adoption”.

And here we talk again about engagement! Compared to normal, static mobile phones, foldable smartphones allow marketers to create new and more interactive ad creatives. You can think of an ad like a kind of origami. Imagine if users could reveal new content by folding their phone and are so attracted to move from one side to the other of the screen. This could be made with, e.g., a quick game that starts on one part of the screen and ends up on the other. You could also have options like “unfold to play” or “fold to go to AR”, letting people play not only with the screen but also the device itself. Maybe the “fold” will become the new “swipe”.

If foldables will be a game-changer for mobile advertising is too soon to be said. But what we know is that, like new emerging mobile ad formats as VR, or AG, foldables are an opportunity for marketers to push engagement to the next level. People want to be entertained, and foldables on the market show customers' interest in new display formats and new levels of participation. In the meantime, contact us if you would like to know what are the best engaging ad creative for your next mobile ad campaign 😉