The Effect of Product Placement

The Effect of Product Placement 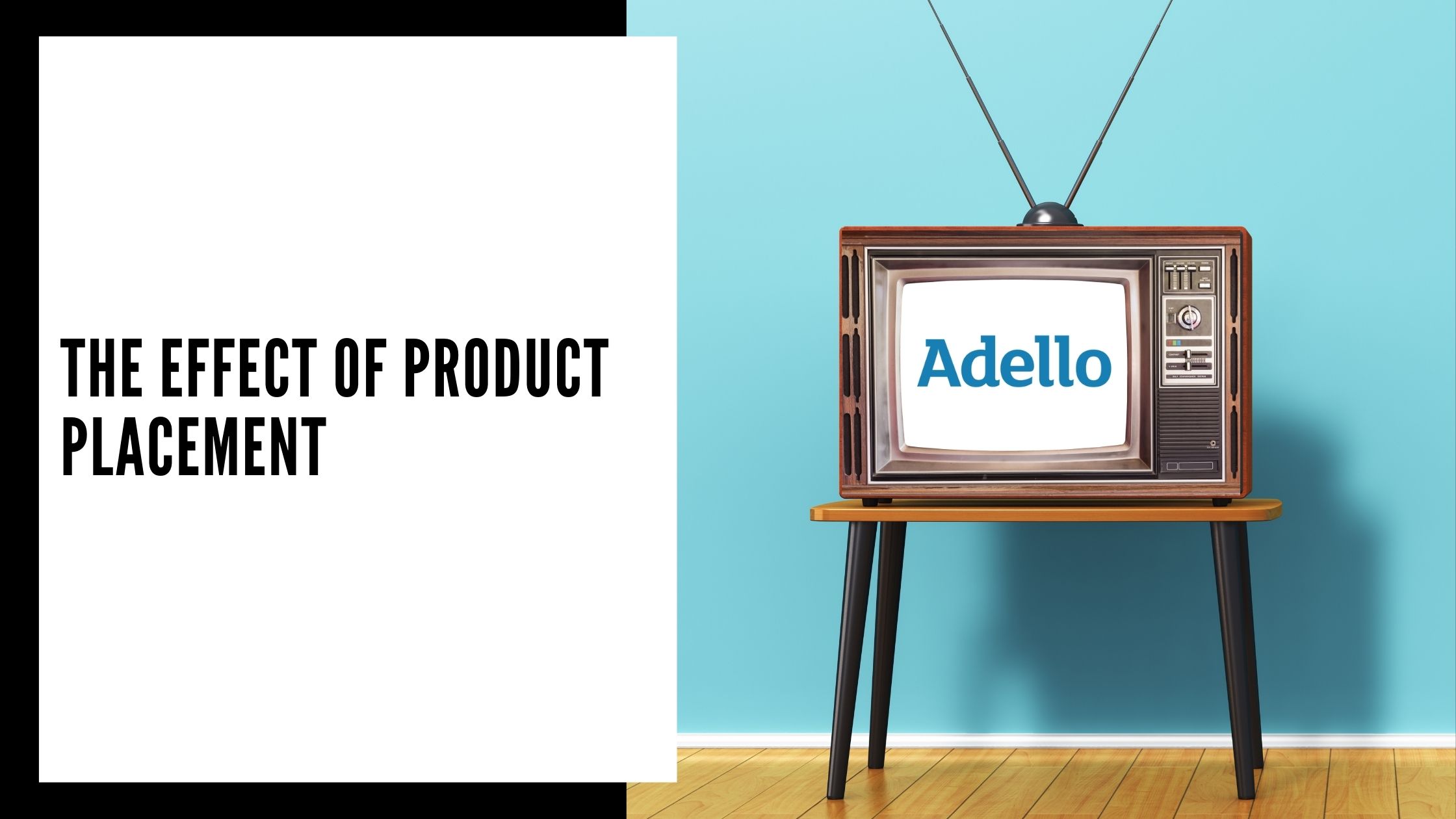 The story of product placement began in the 19th century. In the past, product placement frequently appeared in the literature, for in Around the World in Eighty Days, or on paintings, like on A Bar at the Folies-Bergère by Édouard Manet. Due to the technology and media development, product placement, as a marketing method, has gained popularity and can now appear in songs, movies, music videos, and other media.

The main idea of product placement is that the audience won’t perceive the appearance of the product in the show as an advertisement. The goods are integrated in a natural way within a play. The chosen brand has to be associated with the characters or context of the placement and generate positive feelings towards the brand.

Another benefit of the product placement is the fact it never expires. Unlike other types of advertisement, which can be set only for a fixed period of time, product placement can go through generations. However, the price of this type of marketing is high and can reach hundreds of thousands of USD.

The product placement is quite a challenging way of advertisement because the product should look native in the environment and be in the right context. Otherwise, the unpleasant consequences may happen, like in the recent case in Sex and the City.

Death in the show

The recent scandal case of product placement appeared in the reboot of Sex and the City.

Surprisingly for all series fans, one of the main characters, Mr. Big, died right on the Pelotone bike. Pelotone, exercise equipment, and the media company claimed they knew that their product was supposed to appear in the new episode “And just like that…”, but they didn’t expect the demise of the main character. Also, The Pelotone confirmed that the product placement wasn’t paid. Although the company coordinated the product placement, HBO didn’t announce the plot in advance because of “confidentiality reasons”. HBO declined to comment on this situation. This case clearly represents when the product placement can go wrong.

Product placement is all about context and, as we mentioned before. It is supposed to provide a positive connection to the brand. Unfortunately, the context in this situation was chosen quite the opposite. The Pelotone marketing team would have to make some effort to restore their position on the market.

How product placement can affect the brand

The Mr. Big example shows that product placement can influence the brand in a positive and negative way. In fact, the chosen placement can directly affect income, brand trust, and customer perception of a product.

However, as we know, there is no such thing as bad publicity. Suddenly even the negative context can positively influence the brand. In Fight Club, the furniture from Ikea is represented as an essential part of the everyday life of the main character, who is not satisfied with his life. Ikea symbolizes in the movie the consumeristic lifestyle, and later, the character’s flat is set on fire. That product placement is clearly put in a negative context. However, after the movie was released, Ikea representatives claimed that the movie helped increase their brand awareness. Hence, even bad cases can influence in a positive way on the brand.

Not every product placement can be considered as successful. There are several examples of what can go wrong.

World War Z  is a post-apocalyptic action movie. A UN employee (Brad Pitt) is trying to stop the infection that has overtaken the planet.

There is a tense scene in the film where the character infects himself with a virus. He feels depressed and tired from the constant weakening of the immune system. At that moment, he stops in the middle of the buffet, smashes a Pepsi vending machine to distract the distraught creatures, and drinks a dose. Only then does he move on.

Not only movie itself was a disaster and disappointment for the audience, but the product placement of Pepsi left much to be desired. The advertisement is not even trying to be embedded and seems annoying to the audience. Moreover, the appearance of Pepsi in this scene is irrelevant and doesn’t create a good impression about the brand.

This is an example of how the brand was unaware of the placement, which turned out in the conflict.

In the sequel of Hangover, Alan, played by Zach Galifianakis, appears with a bag made by Diophy (handbag brand). He turns to Stu (Ed Helms), saying: “Careful, this is Louis Vuitton.”

Representatives of Louis Vuitton were extremely outraged with both the fact that the brand is mentioned in the film and that a handbag created by another company is being issued for their products. Louis Vuitton claimed this scene to be offensive to the brand and sued Warner Bros.

Warner Bros won in the court. However, this case demonstrates how the negligent approach of mentioning certain brands can lead to unexpected coincidences.

Converse often appears in different movies, from Harry Potter to I, Robot. However, not all of them are successful.

There is quite extraordinary product placement of the sports shoes, which appears in Maria Antonietta directed by Sofia Coppola. The peculiar director’s decision was to add the modern elements in the 18th-century internment presented in the movie, such as New Wave and post-punk music in the soundtrack. But the most controversial element of the movie was the product placement of Converse, appearing in the scene for a couple of seconds.

The first reaction would be dissonance. Despite many historical inaccuracies appearing in the movie, the pair of sports shoes in the 18th century seems to be too much. No doubts, it was an original decision by Coppola: the Converse is supposed to show the rebellious spirit of Maria Antonietta. However, it is indeed quite a controversial decision. The good news is that the Converse appearance in the movie leaves an unforgettable impression long after the movie is watched.

Omega Watches in James Bond No Time To Die

The James Bond franchise is famous for its brilliant product placement, organically seen in the movie scenes. In fact, this franchise creates a lucrative opportunity for advertisers. The recent James Bond movie No Time To Die was not an exception.

The character of James Bond (Daniel Craig) represents a flawless personality, which chooses exclusively impeccable brands for his daily life. The luxurious watches Omega’s new Seamaster Diver 300M 007 edition appear several times on James Bond’s wrist in the movie. According to Omega’s press release, the watches have been “Purposefully built with the needs of 007 in mind”.

After the movie was released, the Omega Seamaster Diver 300M 007 edition became popular in both the UK and US.

Gucci in House of Gucci

Why make several-second product placemen when it is possible to make the whole movie about the brand! The recent House of Gucci discloses the mysterious story about the brand owners. It is not only a high-priced-in-production movie but also brilliant storytelling.

Since the movie was released in the theaters, Gucci was able to significantly increase their sales, especially for the vintage pieces. The sales spikes appear in the US and several European countries. The searches rate rose by 270%.

FedEx in Cast Away

The movie Cast Away tells the story of a FedEx employee who was stranded on an uninhabited island after the plane crash. He is desperately trying to survive and return home.

Although FedEx didn’t pay for the product placement, it supported the filming process. For instance, FedEx provided access to their facilities in different countries shown in the movie. Moreover, they supply the film crew with logistical support, transport and uniform.

FedEx was able to control the production process, which lasted more than two years. Even the CEO of the company, Fred Smith, appeared in the frame.

As a result, FedEx increased its brand awareness in Asia and Europe after the film was released.

The TV show Stranger Things is well known for its 80s aesthetic. That brings opportunities for the vintage products to be advertised.

The show creators made waffles Eggo the favorite food of one of the main characters, Eleven. After the season of Stranger Things was released, the Eggo waffles gained popularity again. That year Eggo was mentioned on Twitter. The company values this exposure at $201,801.60. That’s how the product that was losing its popularity gained sales again.

Product placement is a wonderful advertisement method. It is important to remember, that as with any other marketing method, it should be used wisely. The right thought strategy of using the product placement can bring many benefits, such as sales, product recognition, and popularity.